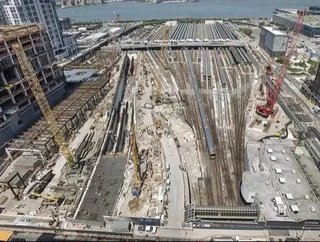 Hudson Yards is one of the most complex construction projects in the history of New York City and is being constructed 28-acres over a working rail yard. 300 caissons, which are 4 feet in diameter and 20-80 feet in depth, support the platforms and buildings and are drilled deep into the bedrock between existing tracks. The finished towers extend from the caisson foundations, through the platforms, and rise skyward.

The Eastern portion of the platform will use 25,000 tons of steel, 14,000 cubic yards of concrete and will weigh more than 35,000 tons. Caisson drilling started in March 2014 and the platform was completed in 2015. The trains have remained operational during construction and the new No.7 Subway Extension opened at Hudson Yards in 2015.

The first tower on the site to be completed is 10 Hudson Yards and was opened in May 2016. It is currently fully leased to companies that include Coach Inc., L’Oréal USA, SAP, Intersection, Sidewalk Labs, VaynerMedia and Boston Consulting Group. The tower ascends 895 feet with 1.8 million square feet of commercial space.

30 Hudson is due to be completed in 2019, will have 2.6 million square feet of space and will be 1,296 feet high. It will be the second tallest office building in New York, and will be home to leading media, business and financial companies including HBO, CNN, Time Warner Inc. and Turner Broadcasting.

The third commercial tower is 55 Hudson Yards, which will be 780 feet tall and 1.3 million square feet. The office towers are part of the overall plan of 4,000 residences and retail space, including Manhattan’s first ever Neiman Marcus store, and will open to the public by 2018.