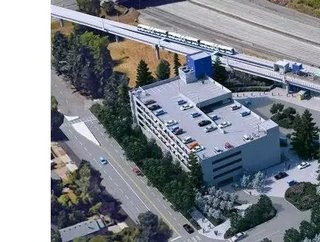 Civil construction on the Lynnwood Link extension is now more than 25 percent complete, marking a major milestone for the project, according to Sound Transit, the public transit agency serving the Seattle metropolitan area in the US state of Washington.

The final drilled shaft was completed last Friday, with more than 130 of the project’s 188 columns completed, along with 50 girder spans.

"Thanks to the hard work of the construction team and our contractors, the pace of progress on the Lynnwood Link extension has been remarkable," says Sound Transit CEO Peter Rogoff. "Groundbreaking on the project was just over a year ago, and civil construction is already a quarter of the way complete. When it’s finished, the extension will transform travel between King and Snohomish counties."

The project made a major advance late last month with the first part of installation of falsework to support the elevated light rail guideway crossing I-5 in Mountlake Terrace.

The falsework, the installation of which required the closure of the freeway’s southbound lanes overnight for three nights, consists of temporary steel column systems between and outside girders that support constructing the concrete deck that light rail trains will eventually travel over. The installation on the rest of the falsework, which will cross I-5’s northbound lanes, will be completed early next year.

In addition to the progress on the alignment, work is underway on three new garages, which will add 1,500 new parking spaces for riders in Shoreline and Lynnwood.

By 2024 Lynnwood Link and other extensions currently under construction will more than double the length of the region’s light rail system. After Lynnwood opens, passengers from the Lynnwood Transit Centre will be able to take 20-minute rides to the University of Washington, 27-minute rides to downtown Seattle and 60-minute rides to Sea-Tac Airport.

A joint venture between Stacy & Witbeck Kiewit and Hoffman, as well as a Skanska Constructors L300 joint venture are executing the civil construction on the extension, Sound Transit says. Mass Electric Corporation has recently been awarded the systems construction work; it adds.

The £2.14 billion project budget includes up to £867.3 million from a Full Funding Grant Agreement executed by the FTA. In addition, the US Department of Transportation’s Build America Bureau executed a £487.8 million low-interest loan supporting the project.

That loan was one of four loans captured in a Master Credit Agreement reached between Sound Transit and the USDOT at the end of 2016. The one-of-its-kind agreement should save regional taxpayers between £148.2 million and £222.4 million through lower interest costs.