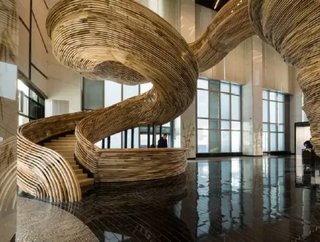 The newest addition to Israel’s growing Diamond Exchange District is the uniquely geometrical Amot Atrium Tower, designed by prominent architect Moshe Zur. Located at the entrance of the Ramat Gan central business district in Tel Aviv, it presents a richly detailed and dynamic façade to visitors entering the city.

At 158 meters and with 38 floors of retail, the glass skyscraper has been awarded LEED platinum certification - the first of its kind in Israel.

Each floor of the 43-storey tower is comprised of two wings embracing a common elevator core that is visible from outside. The north-facing atrium volume extends throughout the entire height of the tower, allowing a controlled amount of natural light to filter into the floor lobbies. This offers building users a viewing experience both while waiting for the elevator and while riding it.

Additionally, the visibility of elevator movement from outside creates a dynamic tower façade from the outdoor perspective. The geometrical sequence exposing the atrium on the lower part of the tower continues until the upper floors. The upper floors enclose the atrium, which becomes an internal volume within, creating a unique geometrical formation.

Located in the entrance hall of the tower is an extraordinary sculptural staircase made from American tulipwood. In fact, the building's name is drawn from its impressive atrium entrance hall, designed by architect Oded Halaf. Halaf is responsible for the idea to construct a tornado-shaped staircase, a sculptural piece that would provide both movement and interest into the orthogonal, glass-encased, four-storey high lobby.

Halaf also wanted the staircase to be free of all visible support - a complex and seemingly impossible assignment, which had to be contracted out to an expert, who held the right mix of knowledge, experience and immense creativity.

Given the complexity of the project, Halaf commissioned Tomer Gelfand, a master craftsman who specialises in providing architectural solutions to engineering problems.

Since inheriting his father’s studio, which was founded in 1976, Gelfand has had extensive experience with intricate design implementations in wood, stainless steel, and glass. Over the course of an 18-month period, from the time that Halaf presented his rough sketch of the staircase to Gelfand, he managed to execute, supervise and finalize all stages of construction, turning Halaf’s dream into a reality.

According to Gelfand, the stair structure is composed of two interlocking parts: a skeletal metal staircase and a sculptural wooden envelope. Together, they rise as an expressive tornado from the reception desk - conceived at the ground and rising up to the first-floor mezzanine, fourteen meters above.

The reception desk was envisioned as the starting point for the spiralling wooden sculpture, and is made from the same tulipwood as the stair railings. To make this happen, Gelfand devised a system of continuous wooden profiles, which look fluid and flexible, but which are extremely stiff and stable.

“The entire structure includes the spiralling stairs and a tornado-like element, which seems to emerge from the reflecting walls of the entrance lobby. The stairs and the tornado elements merge at the top of the first floor, and the round top acts as a viewing balcony to the impressive hall below. Above, it is topped with a similar round element, crowning the project and perfecting the intricate composition,” said Gelfand.

Gelfand began by implementing an MRI-type scan to the skeleton, cutting vertically through the structure and generating sections in the width of the given wooden profile. The resulting number of cross-sections, each exported with a different radius requirement, produced a seemingly-endless number of arches. In order to deal with this, Gelfand narrowed it down to ‘master-arches’ - devised by calculating the wooden profile’s average bending tolerance, which dictated the radius and angle of the ‘master-arches’.

Next was creating the radial profiles from the material itself: a total of 9,000 linear meters of tulipwood was cut by CNC machine to create the stock for the master-arches, each coded and marked to fit precisely in the grand scheme. As no single piece was interchangeable, every measurement had to be taken in advance to ensure the success of the final installation. For example, each of the connecting points between the modules was completed with a reverse radius; together, they form a sinuous wave, thus creating a seamless transition.

American tulipwood was selected for the project by both Halaf and Gelfand, as it fulfilled the requirements in terms of colour. Additional factors were the cost, performance and workability of the material. Sourced from local suppliers, a total of 120 cubic meters of tulipwood was used in this project.

According to Gelfand, freshly cut tulipwood showed a variety of natural colours, which would have hindered the seamless quality of the structure. In order to unify the design, a palette of 12 average shades was selected from the tulipwood pieces and then applied to the modules.

Lastly, the coded profiles were delivered to the site in order for the final puzzle to be put together: a very precise, four-month long, delicate process of assembly managed and supervised by Gelfand himself.

The final result encapsulates the paradox of contemporary creation: what appears as an artistic, hand-drawn gesture, is, in fact, a result of algorithmic data processing and the product of countless interchangeable pieces. Seemingly arbitrary yet utterly computerized; nature’s matter harnessed by today’s true artists of technology.

“Functionally and aesthetically beautiful, the staircase is in fact a viewing balcony to the office lobby below it. Though the structure may seem flexible, it is in fact completely unmovable; a combination of algorithmic data processing and masterful craftsmanship, creating an organically-inspired, artistic result,” concludes Gelfand. “Navigating it isn’t meant to be as simple as taking a functional set of stairs to get from one level of a building to the next; it’s an experience in itself, taking in the whole structure from a new angle with every step.”

The Amot Atrium Tower that houses the staircase has achieved LEED Platinum certification, which means it reaches the highest possible levels of sustainability and resource efficiency. It’s fitting then that its lobby feature an organic installation. Working with tulipwood, which is relatively light in weight and has a very high strength to weight ratio, Halaf and Gelfand have created a striking structure, which is not just a work of art in its unusual shape but also an example of how high-tech design and traditional woodworking can come together for modern usage.