Vita Inclinata seals US distribution tie up with Trident 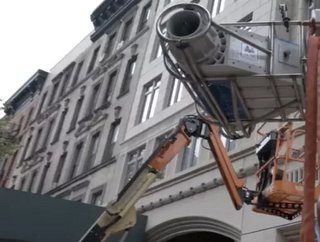 Trident Construction will be an exclusive reseller of the Vita Load Navigator in New York, New Jersey, and Connecticut.

Like the Vita Load Pilot, the Vita Load Navigator attaches under the crane and uses the Load Stability System technology to provide heavy duty control and precision to place loads up to 40 tonnes on construction sites.

Even in adverse weather conditions, such as high winds from Manhattan's wind tunnels, the system automatically adjusts to keep the load stable and in a precise orientation. The technology operates to keep workers safe while simultaneously increasing efficiency on job sites and is a safer alternative to taglines.

"When it comes to crane safety, there are no second chances. Those are the things that keep me up at night," said Trident CEO Patrick Murphy.

Trident, a high-rise and super-structure contractor in the city, owns and operates their own fleet of cranes; thus, sees a huge opportunity for the Vita Load Navigator to keep the project safer and increase efficiency on the job. "Having an automatic system on there that will hold that setting even if winds are acting on it, and a pendant that lets you change the orientation of the load quickly, it doesn't exist right now. It's a piece of rope [tagline] hanging off a load."

"This relationship with Trident is exciting for Vita, and to me on a personal level. Patrick and I share a connection as Naval Aviators, where safety and precision are mission requirements," said Chief Commercial Officer, Shelby Mounts.

"That connection brought us together for a technology demonstration on one of Trident's high rise construction projects in Manhattan. Seeing the innovation and precision that Vita's products bring to high risk construction sites launched this relationship. We can't wait to get Vita's Load Systems onsite and make a difference with Trident."

Trident General Contracting, founded in December 2017 is an Open-Shop Concrete Foundation and Concrete Super-Structure contractor based in Bronx, New York.

Trident was formed through the purchase of Advanced Contracting Solutions' assets, contracts, and operates with many of the professionals that gave ACS a stellar reputation.

With more than 50 years of combined industry experience and a team of professionals with over $600 million in completed construction work, Trident strives to be on-time and on-budget, high-quality performance.Trident uses leading-edge construction technology combined with good old-fashioned hard work to realise clients' goals and expectations.

A friend's death during a rescue operation, with a helicopter close but unable to stabilise due to weather and terrain, was the genesis of Vita Inclinata. Founded in 2015, Vita today controls chaotic swinging and spin, and adds safety and precision for rotor wing and fixed wing aircraft and cranes.

With the mission of "Bring them home, every time," Vita's technology changes the narrative while saving lives, time and money across industries, including search and rescue, military, firefighting, public safety, construction, wind energy, and oil and gas. The company is headquartered in Broomfield, Colorado, with offices in Washington, DC and Huntsville, Alabama.

The global crane market is forecasted to record a value of US$41.39 billion in 2025, progressing at a CAGR of 5.24% during the period spanning 2021-2025, according to ResearchAndMarkets.com.

According to a survey earlier this year by ProSight Specialty Insurance, the biggest safety risk facing the crane industry is a lack of qualified talent, particularly at the Crane Operator position. Talent was also tied for the second biggest business challenge for Crane companies over the next three years (along with Growth/New Business), behind only the pandemic.