Bayonne Bridge project to complete ahead of schedule 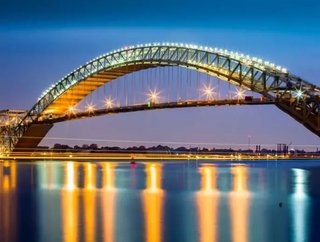 Completing six months ahead of schedule, the Bayonne Bridge project will enable an increased number of larger container ships to reach existing terminal...

Completing six months ahead of schedule, the Bayonne Bridge project will enable an increased number of larger container ships to reach existing terminals as a result of the heightened roadbed, enabling economic growth and increased employment throughout the region.

Although the bridge has been established since the 1930s, increased population growth and congestion both on land and sea has required the bridge to be upgraded. Once completed in July, the bridge will enable cargo ships reaching heights of 215 feet to pass through, leading to a predicted spike in shipments and neo-Panamax ships to pass through. It is one of the longest steel arch bridges worldwide spanning 5,780ft, and is a National Historic Civil Engineering Landmark.

Skanska Koch and Kiewit Infrastructure are working in partnership to complete the project. New Jersey Governor Chris Christie has said, “This is truly an engineering marvel. Engineers have compared it to performing open heart surgery while the patient runs a marathon,” where the project has not disrupted the continual traffic flow whilst construction works remain underway.

Christie added, “This project is going to bolster the reputation of an already great port and one that does as much or more business than almost any other port in the world.”