Maverick Aviation unveils jetpack for use in construction 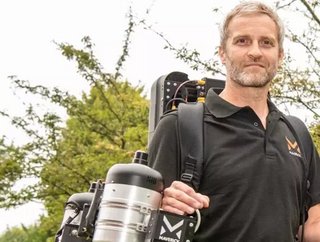 Engineers from Maverick Aviation, manufacturers of personal aerial mobility systems, have announced it has launched a jetpack that can be used in hard-to-reach places on construction sites. The company says it can also be used to carry out challenging maintenance and inspection work, as well as replace helicopter operations and traditional inspections.

Antony Quinn, CEO, and co-founder of Maverick Aviation, said: “The jetpack uses the same sort of jet engines that you see on a passenger plane, only ours are the size of a rugby ball.

“What is unique about what we’re doing is the computer-controlled autopilot system that makes flying effortless and easy to control with precision. That’s how we have changed jetpacks from exciting to useful.

“It’s so intuitive to fly that the cost of training is going to be low, so you’re going to have all sorts of professionals suddenly able to work in the most inaccessible environments safely and quickly.

“I realised that the growing onshore and offshore wind industry really needed a solution like this. Their engineers climb up ladders inside these structures for hours each day and, in an emergency situation, it’s almost impossible to get down quickly. Drones can be useful for inspections, but in many circumstances, you need to get an engineer up there.

“During tours of Afghanistan and Iraq, the number of possible use cases just kept on mounting and I realised how big the opportunity was. The potential is almost endless.

“Before, people would have used a £30m helicopter to perform some simple tasks, we can offer a more tailored solution at a fraction of the cost,” he said.

Karen Taylor, Group Head of Grants at Catax, said: “What Antony and Matt are doing is the stuff of dreams. When we think of jetpacks, plenty of Hollywood scripts come to mind but this is the first time such a versatile piece of equipment is being created with business use cases at the forefront.

“They’ve achieved an incredible amount so far, and it’s fantastic that a British company is leading the way on such an important, game-changing piece of technology," she said.

Who developed the jetpack and how does it work?

Maverick’s Aviation’s jetpack was jointly developed by Matt Denton, a former Hollywood animatronics expert, and Anthony Quinn, a commander in the Royal Navy. Designed to be operated hands-free the jetpack uses Vertical Take-off and Landing (VTOL), making for safer flights and the ability to land in precise locations including wind turbines, buildings, and other construction projects with restricted access.

Using 3D printing technology, the jetpack is made from materials such aluminium, carbon fibre, and titanium meaning the jetpack is very lightweight. It can travel at speeds between 10mph and 30mph to suit the task at hand.

The first manned test flight is scheduled for next summer with the company is about to start seeking further investment to take the jetpack to market.