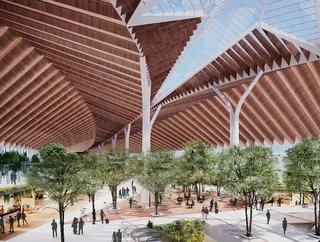 The City of Chicago has awarded a lead architect contract worth $160m to Studio ORD to deliver the design of the $8.5bn expansion of America’s O’Har...

The City of Chicago has awarded a lead architect contract worth $160m to Studio ORD to deliver the design of the $8.5bn expansion of America’s O’Hare International Airport.

Studio ORD will work alongside the Chicago Department of Aviation (CDA) and key stakeholders to drive the design concept for the expansion programme which will provide a new Global Concourse and Global Terminal for O’Hare International Airport.

The CDA hope the expansion programme, known as O’Hare 21, will be both a catalyst for transformation in aviation and a catalyst for growth for Chicago’s 77 communities.

Studio ORD’s lead designer Jeanne Gang commented: ““Every aspect of the design is focused on creating a uniquely Chicago experience. It embodies the city’s fundamental geographic asset: a place of convergence of paths of movement both natural and man-made.

“Our design creates a new Chicago neighbourhood that reflects the culture, traditions, and diversity of the city. Its exposed structure, interior streets, and bustling activity express our city’s trajectory as a centre of movement, exchange, and growth.”

Studio ORD’s design for the new O’Hare Global Terminal and Global Concourse celebrates Chicago’s history as a city shaped by lines of movement and extends that legacy for the 21st century. Like the confluence of the Chicago River, the design’s converging three branches create a central hub that establishes a vibrant new neighborhood in the heart of O’Hare’s campus.

Smoothly bending to increase efficiency, wayfinding, and connectivity, the tripartite design merges terminal and concourse into a single building that is uniquely evocative of the city of Chicago. At the branches’ confluence, a dramatic Oculus welcomes visitors under a six-pointed glass skylight whose geometry references the Chicago flag. Surrounding the Oculus is a rhythmic, pleated roof of long-span steel trusses. Clad in wood and emphasizing the building’s curving form, the pleats are spaced and oriented to maximize natural daylight and energy efficiency.