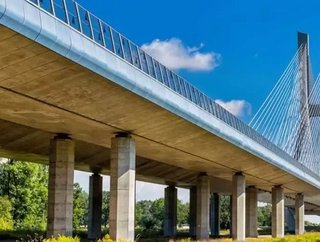 Within the frames of road investments planned in Poland to the year 2020 the number of bridge-type works made with the use of the incremental launching...

Within the frames of road investments planned in Poland to the year 2020 the number of bridge-type works made with the use of the incremental launching method has substantially increased.

ULMA's method consists in prefabrication of subsequent stretches of the bridge deck in a fixed prefabrication area and next, after prestressing them with already made segments, sliding them forward on prepared piers with the use of hydraulic devices. This method is particularly recommended in places where ground conditions prevent the use of conventional shoring system or when their use becomes uneconomical.  Another important reason may be erecting bridge works of substantial length, characterised by fixed size cross-section as well as structures that are straight or have a spatial curve of constant radius..

On the route of the S19 between the Swilica junction (DK4) and Rzeszów Poludnie junction (Kielanówka) – a 476 metres long E-1 Bridge is constructed using the incremental launching method. This structure with the straight-shape layout in a horizontal projection has a longitudinal gradient of 0.8%.

The superstructure of the viaduct was designed as over 11 metres wide and 3.5 metres tall box-sections. The construction was divided into 17 stages of various lengths. One stage will be about 14 metres long, three stages 24 metres each and the remaining ones 30 metres each. In case of this structure the system of hydraulic cylinders was used, which pull the superstructure on the constructed piers in 30-centimeter strokes.

ULMA was entrusted with designing and providing the formwork technology for the construction of foundations, abutments, prefabrication position and piers as well as scaffoldings to operate slide bearings.

The formwork design assumed preparation of the 30 metres long launching position. The formwork solution was designed based on the universal MK System: ENKOFORM VMK and ENKOFORM HMK. MK System is a product with a wide array of applications and allows executing extremely varied configurations: from heavy load structures for civil engineering to lighter loads for buildings, always using the same basic components. The formwork technology with the use of the hydraulic system currently offered by ULMA enables stripping and re-closing of formwork during one duty cycle for the entire stretch, including the formwork of the bottom slab, external formwork and of cantilevers.

This system enables an easy and safe detachment (lowering) of the entire external formwork structure over the length of about 30 metres (an equivalent of 700 sq. m. of formwork) and re-establishing it on the concreting position.  After each pour, with a hydraulic system the outer formwork was detached and prepared for the following cycle while the inner formwork units were rolled back for the next pouring. Applying the hydraulic system significantly facilitates and speeds up the assembling work and helps to improve the economics of the project.

For the construction of the top slab a mobile table formwork was designed, made on the basis of MK-120 steel beams, VM timber beams and E type push-pull props. Transport of the tables is made by VR carriages.  The solution offered by ULMA allows the construction of 30 meters of the deck within 7 days.

The intermediate piers of 12 m high are made using the beam formwork ENKOFORM VMK. Safe works during the erection of piers and the entire launching process is guaranteed by the use of system working platforms as well as BRIO stairs.

Since the technologies proposed by ULMA proved to be successful at the construction site of the S19 Bridge they were also applied to the two-lane MS-6 viaduct of 746 m length, located on the S5 express road between Korze%u0144sk and the Widawa Wroc%u0142aw junction. Box-section superstructures of the work were designed in arches of about 2600 m radii with the constant transverse gradients and variable longitudinal gradients. The construction was divided into 29 stages. Two first and two last stretches were of about 17 m length, the remaining 25 segments of about 27 m. The length of the manufacture position was 30 m. In case of this construction finished stretches are slid using the stepper cylinder which enables lifting of the superstructure and moving it forward in strokes of 25 cm each.

The formwork technology used for the box structure and cantilevers was the same as in the case of E1 Bridge.

Considering the size limitations resulting from the detailed design, for the construction of the deck slab a mobile formwork on roller cantilevers was designed, consisting of the solution based on MK-120 steel beams, elements of wall system COMAIN and push-pull props of E type. The roller cantilevers are only used for supporting the top slab during the slide. The solution that was applied enables relocation of the formwork of the top slab in a form of one complete set onto the next section.