Work Begins on $95m Fox River Bridge Project on I-90 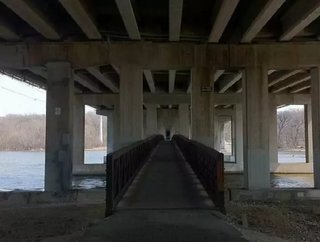 The Illinois Tollway has begun work on the $95 million Fox River Bridge project on the Jane Addams Memorial Tollway (I-90) in Elgin.Commencement of the...

The Illinois Tollway has begun work on the $95 million Fox River Bridge project on the Jane Addams Memorial Tollway (I-90) in Elgin.

Commencement of the project was marked by the closure of the 660-foot Bridge’s bicycle and pedestrian bridge which runs underneath, and the mobilisation of equipment including cranes, excavators and earthmoving equipment in preparation for the smaller bridge’s removal and reconstruction.

The Illinois Tollway is rebuilding and widening the Fox River Bridge, which was constructed in the 1950s, as part of the Jane Addams Memorial Tollway (I-90) Rebuilding and Widening Project. Scheduled for completion in 2016, the project includes the construction of two new, wider bridge structures, drainage improvements and replacement of the existing bicycle and pedestrian bridge.

The two new structures will expand capacity from six lanes to eight with full shoulders in both directions to accommodate the new, wider I-90 roadway, and the 101,300 vehicles that use the bridge daily.

They will be 1,315-feet long and will stand 40 feet above the surface of the Fox River and adjacent roadways. Their eight spans will be supported by seven piers, a reduction from the existing 14 which is intended to reduce the environmental impact on the waterway and forested fen below.

The spans will feature 144 beams, with each beam 150 to 170 feet in length and 7-foot 6-inches in height, weighing approximately 200,000 pounds. Stainless steel rebar will be used in the concrete decks for a longer bridge life.

Illinois Tollway Executive Director Kristi Lafleur said: “The Fox River Bridge is a critical piece of our $2.5 billion I-90 Rebuilding and Widening Project. Our goal is to make construction as convenient as possible for residents and businesses, while delivering a new, wider bridge that is more sensitive to the environment.”

Once the bicycle and pedestrian bridge has been removed, work will begin in the Fox River to build two construction platforms under the bridge. The temporary platforms made of crushed rock will extend about 185 ft from each bank and will be 200 ft wide, with space between to allow the Fox River to flow through.

The platforms will be used to move equipment into the river and under the bridge for removal of the bridge above, as well as to construct the new bridge support piers in the water. Construction of the platforms is expected to take a month to complete.

When complete, the new bicycle and pedestrian bridge will be similar in length and appearance to the existing structure, however, it will be widened from the current nine-foot width to about 12 feet to improve access and assist with Tollway maintenance and inspection of the Fox River Bridge.