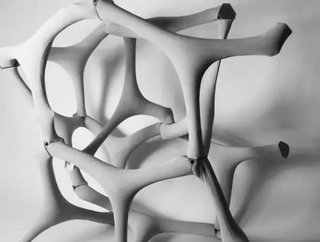 The use of concrete within building has been utilised for over 10,000 years and has increasingly become one of the most applied materials within constru...

The use of concrete within building has been utilised for over 10,000 years and has increasingly become one of the most applied materials within construction. Once cement is dried, concrete provides solid, permanent structures which are durable, weather resistant and reliable. However, concrete is not known for its flexibility within architectural design and structural builds – until now.

Whilst studying at UCLA Suprastudio in California, Designers Joseph Sarafian and Ron Culver were asked, “how can motion be integrated into the traditionally stagnant casting process?" by renowned architect Julia Koerner. Eager to create a method in which concrete could be used to create innovative and flexible designs, the duo began a project as an independent study which would see them robotically manipulate fabric into various shapes. These early experiments were encouraged with the support of Peter Vikar, Shobitha Jacob, Oscar Li and Qi Zhang.

The duo’s aim to create a new method in providing flexibility within a material known for its rigidity, in order to incorporate larger architectural forms would therefore enable architects and designers to build a variety of structures and provide increased freedom.

Through the use of parametric design, which Sarafian explains is “both a movement and a methodology for designing intelligent controls for manipulating and deriving new geometry in 3D software”, sewn lycra sleeves are attached to “6-Axis Kuka robots and stretched into position. Concrete with a fiber admixture is then poured into the sleeves and hardens. The fabric is stripped away with minimal waste, the robots re-position themselves and a new piece is cast”, providing unique fabric forms or shapes.

With many sections to add to the final form, a 3D printed node was created to ensure the various pieces are correctly positioned. Sarafian explains by stating that the node had to be capable of “locking adjacent concrete arms in place” and be “easily installed and uninstalled without an exposed bolt”, as otherwise it would not be fit for purpose. To ensure stability, the duo incorporated a “truncated tetrahedron as a geometry that could be fixed to the concrete through a nut that is cast into the concrete. The bolt is then driven through the 3D printed "Coupler" and into the concrete.”

“Since the entire composition is designed in 3D, each unique connection angle can be coordinated for a seamless connection in the physical world”, he added.

Sarafian acknowledges that the use of software is paramount for the designs to be efficient and allow the segments to be fixed accurately into position. The inclusion of Rhinoceros software and Kangaroo3D (an add-on for Grasshopper 3D) allows the duo to obtain essential modelling and has “simulated the effects of gravity on the filled fabric to build an accurate 3D model.”

“From this model we were able to extrapolate the locations of each robot arm necessary to create each shape. Those coordinates were then sent to the robots and the fabric was filled.”

This new innovative method will provide increased advantages in architectural design and construction. Sarafian explained, “In architecture, we spend maybe 10% of our time designing and about 90% of our time representing those designs (more or less, depending on the firm). This and other methods present a means from going straight from the computer to built form without the intermediate step of drawing and communicating to a third party.

“We've automated a concrete casting process that dates back to antiquity. Once the base shape is sewn, myriad variation is enabled simply by the manipulation of the robot arms. With casting and other processes, there are savings associated with repetition (using the same form).”

“With this technique, controlled variation is now just as cost-effective as repetition because the robots are doing the precise positioning and fabric takes the natural form that is engineered for. So for designers, it allows for variation to be integrated into their design without being value engineered into a repeated module. For contractors it removes the traditional tolerances of casting concrete (1/2") replacing them with micron-level precision.”

Mark West at the University of Manitoba (founder of The Centre for Architectural Structures and Technologies) has previously undertaken several experiments in fabric formwork; however, the duo’s work has delivered several challenges. The designers acknowledge that public opinion regarding their innovative method is mixed, with many claiming robots take away the unique skill and expertise of design and innovation. However, Sarafian asserts, “there is still a huge level of "digital craft" and precision that goes in”, although now digital technology is now ensuring the delivery of key results.

“We learned this early on when we inaccurately modelled one of the end-effectors, which would have led to inaccurate shapes for every module. This would have resulted in a compounding chain of inaccuracies that would have prevented the entire composition from fitting together. Needless to say, we learned the importance of modelling a precise digital environment.”

There are continual developments within fabric form casting since Sarafian and Culver’s original breakthrough, which they are only too keen to progress. In the next 12 months, the duo has stated their desire to “achieve built forms which can be appropriated into the primary structure of a building, not merely a facade or interior partition application”, which will deliver increased advantages in future builds.

To provide widespread knowledge of their methods for future construction works, Sarafian and Culver presented the next round of research at the Façade Tectonics World Congress in Los Angeles, alongside the Now, Next, Future Conference, to discuss how further developments will shape and influence design and construction methods, which will provide increased benefits within the building industry