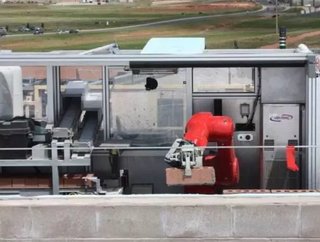 The new robot SAM (semi-automated mason) has been designed to improve the efficiency of human workers rather than replacing them all together. The robot...

The new robot SAM (semi-automated mason) has been designed to improve the efficiency of human workers rather than replacing them all together. The robot is responsible for picking up bricks applying mortar, and placing them, while a human partner handles the more delicate tasks such as laying bricks for corners, tidying up the mortar and setting up the worksite.

That’s not to say the robot can’t adapt, however, as it’s able to differentiate between theoretical drawings and the real conditions of the site. It is also capable of minor detailing such as emblazoning a logo and creating texture to a wall face by bumping bricks half an inch.

Scot Peters, co-founder of the company that designed SAM, said: “In construction, your design will say that a window is located exactly 30 feet from the corner of a building, and in reality when you get to the building, nothing is ever where it says it’s supposed to be. Masons know how to adapt to that, so we had to design a robot that knows how to do that, too.”

A human working alongside SAM is equivalent to four or five traditional workers on one job.