What makes a Smart Building smart? 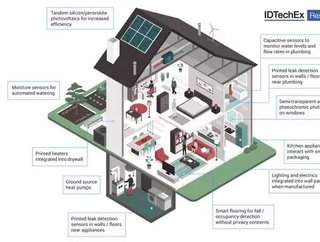 Most of us are familiar with digital technology, from our computers and smartphones to internet-enabled TVs and speakers.

But most people still aren't familiar with 'smart buildings' and a recent paper from IDTechEx aims to dispel a few misunderstandings.

Smart buildings aim to bring digital technologies into the fabric of the building, rather than just to objects within it. They use a wide range of emerging technologies, such as semi-transparent photovoltaics on windows, moisture sensors for leak detection, and printed heaters with wall panels.

Combined with changes to building construction, such as greater use of prefabricated panels with integrated electronic functionality, incorporating technologies such as these promises smart buildings that facilitate predictive maintenance, are more energy-efficient, and are responsive to the needs of occupants.

Anyone who has had a water leak at home knows it is extremely annoying and expensive, with walls, ceilings, and flooring all needing replacement. Furthermore, the affected area is out of action while everything is dried using extremely noisy fans and dehumidifiers. Clearly, a technology that reduces the likelihood and severity of leaks would bring clear benefits to home and business owners, along with insurance companies.

Printed moisture sensors are a promising potential solution, which if integrated into walls and floors would be able to detect leaks at a very early stage and alert the owner of the building. One such approach, targeted primarily at bathrooms, has been developed by the Swedish company InviSense. A printed RFID antenna coil is coated with a moisture-absorbing material. The resonant frequency changes in response to moisture, which can then be detected by an RFID reader. While testing of leaks behind tiling can be performed non-destructively, it does not provide continuous feedback.

An alternative approach to leak detection is being developed by UK company Laiier. It offers low-cost capacitive sensors, which are made from carbon-based inks and can be produced using conventional graphics printers. The thin-film sensor format enables them to be placed underneath appliances such as dishwashers, washing machines, boilers, and pipes, or even under flooring or within walls. The sensors are connected to the cloud, and hence able to provide the property owner with an alert when an increase in moisture is detected, enabling repairs to be performed before a leak becomes significant.

Housebuilding techniques have not changed substantially in many years, with most houses still being constructed on-site using conventional building materials. Plumbing and electricity are installed during the construction process, requiring skilled manual labor during every build. While most cars have been produced on a production line with extensive automation for many years, houses are still essentially handcrafted.

There is thus an excellent opportunity to simultaneously reduce construction costs and provide additional value to the building's occupants by integrating functionality into building materials. Promising examples include incorporating electrical heaters into wall panels, thus removing the need for unsightly free-standing radiators. Electrical switches, wiring, lighting, and other sensor types could also be installed into wall panels prior to installation, reducing the need for individual fixings that increase costs and create visual clutter.

Heating and powering homes more efficiently is crucial in meeting CO2 emission targets since at present around 30% of emissions in developed countries come from domestic households. While clearly greater adoption of established technologies such as thicker wall/roof insulation is important, there is also plenty of scope for emerging technologies to contribute.

Photovoltaic solar panels, currently installed in around 3.5% of UK homes, are a continuing target for innovation. One emerging approach is the construction of tandem photovoltaic cells, which use an additional light-absorbing layer to harvest solar energy more effectively. Oxford PV are a leading player here, with its 'perovskite-on-silicon' tandem architecture demonstrating higher efficiencies (29.5% in a recent laboratory example). It is currently developing a production line to mass-produce these high-efficiency tandem cells.

However, rigid roof-based solar panels are not a viable option for every building. Another alternative is semi-transparent solar cells, which can be applied to windows as thin films. Although less efficient, since clearly less light is absorbed, semi-transparent solar cells enable existing windows to be used for energy harvesting. A further development, currently in its early stages, is photochromic photovoltaics that would absorb a higher proportion of sunlight on sunny days.

Another frontier for the digital revolution

Buildings, both domestic and commercial, have been slow to benefit from the digital revolution thus far. There are many high-tech items within buildings, but generally speaking, little modern technology is integrated within the fabric of the buildings themselves. This is set to change over the coming years, with 'smart buildings' that enable predictive maintenance, efficient construction, and have sensing/heating/lighting/energy harvesting integrated into the building materials from the outset becoming increasingly common.