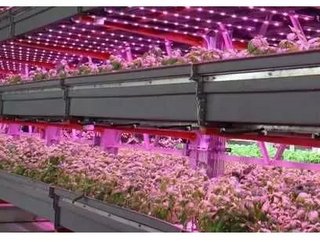 The £137.7 million project from GrowGroup IFS and RainMakers Capital Investment aims to produce 10,000 tons of fresh produce a year...

A joint venture between GrowGroup IFS from Barendrecht in the Netherlands, and RainMakers Capital Investment LLC from Abu Dhabi in the UAE, says that it will build the world’s largest indoor farm in Abu Dhabi.

In a statement, the joint venture says that the GreenFactory Emirates will produce 10,000 tons of fresh produce per year, on a plot that is 17.5 hectares in size, with a cultivation area of 160,000sqm. The total project value amounts to £137.7 million and is planned across different phases over three years.

Phase One will be operational before Expo 2020 Dubai in October 2021, so that GreenFactory Emirates can showcase the world its innovations. The project aims to be a kick-off for similar projects and innovations in other regions of the world where extreme climates are a challenge to normal cultivation.

Utilising the world’s most advanced indoor growing systems from The Netherlands, GreenFactory Emirates will combine vertical and flat farming methods to solve the normal cultivation restrictions that come with the extreme climates in countries such as the UAE. It will include a built-in research and development component that will help ramp up production beyond the 56 current varieties of lettuces, leafy greens, herbs and kale.

It will also optimise its production through the collection of real-time data to inform future global expansion of indoor farming. As such, the facility will also involve a number of leading agro-technological companies during the construction process, the statement adds, as the best of breed for each component will be sourced through top-tier Dutch companies.

GreenFactory Emirates has confirmed partnerships with GAAS Wageningen and Delphy in The Netherlands, which will allow it to benefit from live feedback provided by some of the best students and academia in the field.

Furthermore, the joint venture says that GreenFactory Emirates will save 95 percent of its water consumption, as opposed to standard methods of cultivation. Its CO2 footprint will also be reduced by up to 40 percent.

By growing fresh produce locally, GreenFactory Emirates will also contribute to reducing waste in various other areas. It’s contribution to slowly reducing the reliance on fresh food imports will in turn reduce waste of produce occurring during the transportation processes, while also reducing logistics traffic.

Food security is high on the UAE’s agenda and boosting local production and creating an enabling environment for agri-tech is a top priority for the government.