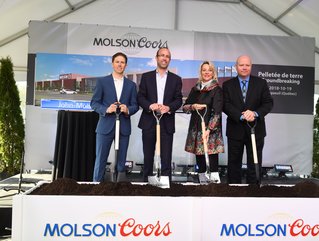 Molson Coors has broken ground on a new Canadian site which it says will be its “most modern brewing facility and distribution centre to...

Molson Coors has broken ground on a new Canadian site which it says will be its “most modern brewing facility and distribution centre to date.”

Located in Longueuil, Canada, Molson Coors said that the project represents one of the largest investments in its history.

The brewer also said that the site demonstrates its ongoing commitment to Greater Montreal, Canada.

The new plant will service the local domestic market and will be capable of producing Molson Coor's portfolio of beer and non-beer brands in bottles, cans and kegs.

Molson Coors Canada said the site will be "the most integrated and agile operation" within the company and that it aims to gain LEED certification, in keeping with its sustainability targets.

"The project will be our most modern and forward-looking production facility and distribution centre," said Matthew Hook, Chief Supply Chain Officer of Molson Coors Canada.

"The new brewery will be equipped with improved technologies that will allow us to reduce our energy consumption, CO2 emissions and carbon footprint, such as optimized equipment layouts to reduce beer loss and waste, and a state-of-the-art CO2 recovery system."

Pomerleau-Alberici, a partnership between Pomerleau and Alberici Constructors, has been chosen to lead the design and construction of the project.