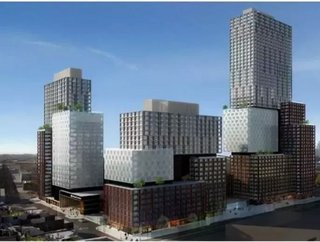 Skanska has stopped work at the site of a new prefabricated residential high-rise tower in Brooklyn and closed down its prefabrication hub at theBrookly...

Skanska has stopped work at the site of a new prefabricated residential high-rise tower in Brooklyn and closed down its prefabrication hub at the Brooklyn Navy Yard, citing design flaws and cost overruns.

The contract is worth $117 million, and covers the supply of 930 modules for a 32-storey tower, of which only 10 have been completed after 21 months of work. Some 157 workers had been employed at the hub to build the steel-framed modules.

It's the first of 14 planned prefabricated structures in the Pacific Park development, and developer Forest City Ratner hoped to save time and money by opting for a modular, prefabricated solution.

Yet a dispute has emerged over cost overruns, for which the developer says the contractor is responsible, having agreed a fixed-price.

Skanska however, blames flaws in Forest City Ratner’s modular designs for the building, and believes the developer should shoulder the additional cost-burden.

Richard A. Kennedy, Co-Chief Operating Officer of Skanska USA, said: “It just doesn’t work the way it was sold to work. We’ve had real challenges with it that’ve delayed the project and led to cost increases. We finally came to the decision to stop work on the project until our significant commercial issues are resolved.”

“It was represented to be a complete and buildable modular design,” he said. “That simply was not the case and that’s what we’ve been struggling with.”

Forest City Ratner insisted that its design was appropriate, and that the dispute with Skanska was purely based on financial reasons.

MaryAnne Gilmartin, Chief Executive of Forest City Ratner, said: “This is not a referendum on modular, it’s a monetary dispute. We’re confident we’ll get the building built. But we’re doing what we have to do to protect the company, the project and the business.”

The 2012 partnership between the two has been a positive one, aimed at developing an innovative and expanding technology, with Forest City claiming its modular high-rises could save 30 percent on the cost of a conventional apartment tower in just 75 percent of the usual time-frame.

However, what would be one of the world's tallest midular towers is now not expected to be completed until late next year, three years after construction began.