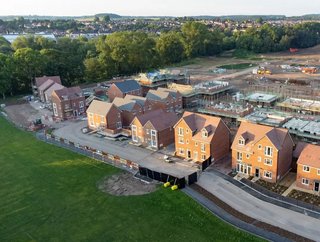 The value of work commencing on site during the three months to November fell 13% against the preceding three months to stand 20% lower than the previous year, according to Glenigan's December edition of its Construction Index.

This Index covers all projects with a total project value of £100 million (or less), with all figures seasonally adjusted.

It's a report which provides a detailed and comprehensive analysis of year-on-year construction data, giving built environment professionals a unique insight into sector performance over the last twelve months.

Particularly hard hit, the value of residential work on site fell by more than a third (34%) against the same period in 2020, and 15% against the preceding three months to November.

Private housing construction starts performed poorly, dipping by a fifth (21%) against the preceding three months to stand 37% lower than 2020 levels. Although social housing starts increased 1%, the value dropped more than a quarter (-26%) against the previous year. This is indicative that supply chain issues continue to negatively affect the sector.

Bucking the downward trend, Industrial project starts were by far the strongest performer in this edition of the Index, increasing 11% against the preceding three months to stand 22% higher on 2020. This made it the only sector to experience dual growth against the previous three month period and a year ago.

Despite generally poor performance, economic indicators suggest this period of general decline is a relatively short-term situation, exacerbated by global material shortages and supply chain issues. Forecasts, including Glenigan’s own, point to start figures surging in the New Year, should these issues be overcome. Strong planning approvals and contract awards, registered in the November Construction Review predict a strong pipeline of upcoming work to help the construction industry back to pre-Pandemic levels of output.

It was a bleaker picture across the rest of the UK. Scotland experienced the worst three months to November, with the value of project starts falling by over a half (58%) against the previous year, and 48% compared with the preceding three months to November. It was a similar story in Wales, down 51% against 2020 figures. This was echoed in the East of England (-25%), North West (-22%), South East (-24%) and West Midlands (-20%).

Senior Economist Rhys Gadsby said following a relatively stable third quarter for starts on projects under £100m, the first two months of Q4 have fallen sharply, especially in November where starts were at their lowest level since May 2020.

“Anecdotal evidence suggests that some builders are delaying starting new projects due to the schedules of existing projects, already on-site, being severely disrupted by material and labour issues," he said. "These issues are likely to hold back project-starts in the near term, however, with main contract awards and detailed planning approvals strengthening, and as material and logistical constraints ease, it is expected that project-starts will start to lift during 2022.”