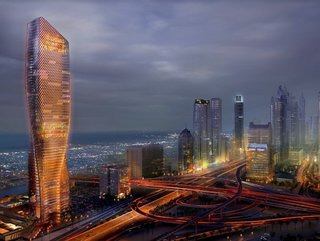 wasl Asset Management Group, one of the largest real estate development and management companies in Dubai, has provided the latest construction update on its ‘wasl tower’ on Sheikh Zayed Road.

In a statement, the developer said that the tower is taking shape, and once completed will stand 302-metres tall in a twisting, asymmetrical design, which will feature the region’s tallest ceramic façade and present an ‘illusion of dynamic motion’.

The tower will consist of 64 floors constituting 229 residential units, 258 hotel rooms as part of Dubai’s second Mandarin Oriental Hotel, 185,345 square feet of office space, and 11 parking floors. The project, with a total built-up area of 1.8 million square feet, will also feature a helipad, adding a dimension of elevated mobility, the statement continued.

Structural works on 56 floors of wasl tower have been completed, and façade works have reached level 13, whereas MEP works are now at level 52, the developer said. The project is expected to be completed by Q2 2024 and will be linked to the Burj Khalifa Metro Station, thus being connected to two prime districts of Dubai – Downtown Dubai and City Walk.

Designed around its Z axis and adopting a classic ‘contrapposto’ movement, wasl Tower faces almost every direction, and has the capacity to acclimatise to local temperatures through shading and cooling techniques, thus allowing the building to be cooled during Dubai’s hot summer months.

These design features represent a cornerstone for the project, which aims to promote adaptability and sustainability by effectively reducing air conditioning consumption.

The architect behind the project is the Amsterdam-based UNStudio, and the construction management, general planning and engineering of the façade has been carried out by Werner Sobek of Stuttgart, Germany.

In addition, Werner Sobek is responsible for the sustainability consulting and acoustic planning of the tower.

Clay was chosen as a basic material for the wasl Tower façade, with the façade fins manufactured as low-tech glazed ceramic elements. The fine lace of fins over the basic skin veils the geometry of the tower, the architect said, adding that the fins not only shade the façade, but also reflect daylight deep into the tower’s interior.

The direction of the fins – 12.8 degrees – and the dimensions and materialisation, have all been developed using the parametric data from the design model, UNStudio explained. The scale, lighting, design and engineering of the inner and the outdoor spaces took inspiration from the sustainable protocol, it added.

Smart communication, security and access strategies also provide a seamless technological foundation on which this sustainable pledge was integrated in the building, the architect continued.

“The open seam that runs the full height of the tower forms a ‘vertical boulevard’ which is topped by infinity pools on the tower roof. This seam is created by a stacking of outdoor balconies, forming a green vein along the building’s silhouette, and allowing a glimpse of the interior.

“This boulevard connects the outdoor with the indoor, which is a unique feature for this region. Clean materials, interactive light levels, and deliberated acoustics are implemented in all spaces throughout the building, with a particular focus on public levels, where culinary experience, hosting and aesthetics come together to heighten visitor experiences,” it stated.