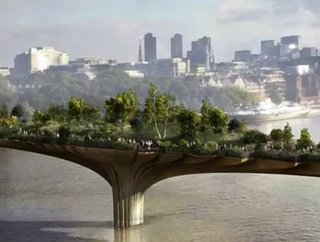 London’s Garden Bridge has been granted planning permission by Westminster Council. Planned by architect Thomas Heatherwick and actress Joanna Lumley, the bridge will span the Thames River and had already been approved by Lambeth Council. The Mayor of London must give the final seal of approval and if permission is granted, construction will start late 2015.

According to reports, the development would create 270 jobs; bringing economic benefits to the area and open access to Temple. The bridge could also provide easier access to other parts of the city for disabled people and children.

Of 292 responses to the planning consultation, 279 were in favour of the plans. The mayor’s office has already pledged £30 million through Transport for London and another £30 million is due to come from the Treasury. Private donors will make up the remainder of the total cost of £175 million, with £110 million already pledged. It is thought the Garden Bridge Trust will ask for donations from the public next year.

Despite optimism that the bridge will get underway next year, some critics have raised concerns that the bridge may limit views of St Paul’s Cathedral and other landmarks. A report drafted for the committee considering planning permission said there would be ‘significant impact’ on views and that if the plans were for a commercial development the application would likely be refused.

Councilor Robert Davis, deputy leader of Westminster City Council, who chaired the committee, said, “This is something that is iconic and absolutely unique, and will be recognised right across the world. I understand the concerns about potential loss of views, but there is no doubting that this bridge will bring substantial and significant benefits to London.”

According to the Garden Bridge Trust website, the bridge is designed to be “somewhere to meet and spend time, with education and volunteering opportunities so people can get their hands dirty, helping with the upkeep of this new community garden. It will also provide a new link between cultural centres and tourist attractions on the north and south banks,” it says.