We look at one of the world’s newest and tallest skyscrapers, recently revealed by SOM, Ronald Lu & Partners and ECADI...

We look at one of the world’s newest and tallest skyscrapers, recently revealed by SOM, Ronald Lu & Partners and ECADI.

With a height of 530-metres, the skyscraper is the third tallest in China and the seventh-tallest in the world. Spanning across 97 floors, the Tianjin-based skyscraper is known as the Tianjin Chow Tai Fook Binhai Center and provides a total floor area of ‎2,714,055 sq ft (252,144.0 metres squared).

The structure, which was constructed between 2013 and 2019, utilised building information modelling (BIM) technology in the design process in order to implement some of the latest technologies and enabling the design to be the absolute best it can be, surpassing expectations of the initial design.

Thanks to the adoption of the technology, the tower has been described as "an excellent example of Ronald Lu & Partners’ commitment to excellence."

BIM not only improved the overall design of the building but also saved a lot of time and resources during both the planning and construction process. In addition, it played a very important role in optimising the innovative crystal-clear hyperboloid winding glass curtain wall.

Architects across the globe in recent years have been adopting BIM in order to boost the accuracy and efficiency of designs. For some, the use of the latest BIM technologies are vital in ultra-complex buildings like this tower. 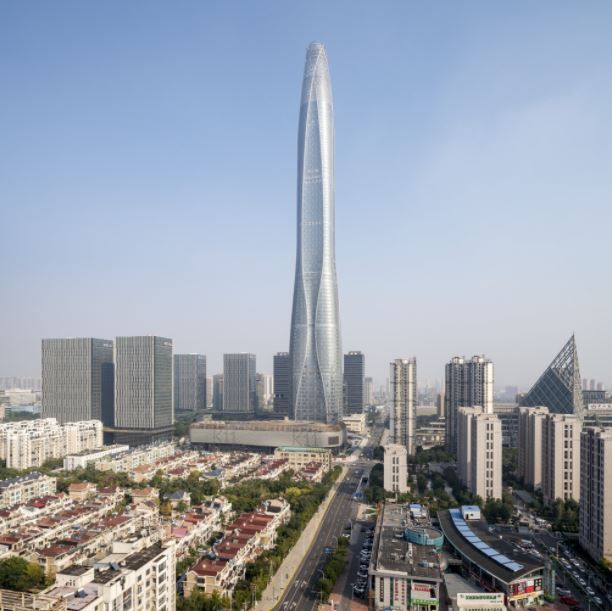 In addition to BIM, end-unit segmentation and cladding optimisation assisted to simplify the construction process even further. Thanks to this, the centre was built four months ahead of schedule.

In a press release, RLP said: "At the start of the construction process for the Tianjin Chow Tai Fook Financial Centre, experts estimated that at least 1,308 pieces of independent asymmetric insulating glass units (IGUs) would be required for its unique curtain wall structure, formed by the intersection of eight irregular curved surfaces.”

"However, after performing BIM analysis and using repeated data modelling, the number of independent IGUs needed for the Centre’s curtain wall was reduced to 476 – a decrease of over 60%."

Arguably, the Tianjin Chow Tai Fook Financial Centre has been one of the most complex skyscraper projects in China to date, but thanks to digital technology like building information modelling, each step and goal can be achieved more efficiently than ever before.