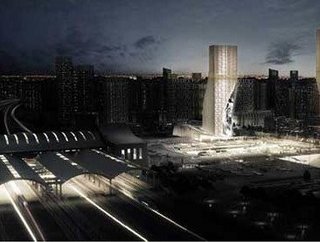 Conceived by Zaha Hadid Architects, the Galaxy Soho building is a unique space created by interlocking domes which meld within one another. Natural life is abundant throughout its levels, curves and atriums. It is a far cry from the traditional stuffy office.

This hotel’s bold shape is only one facet of the ingenuity of the building itself. As a hotel it faced the challenge of maximising limited available land while taking into account the need for natural light and ventilation for the 321 rooms; including 40 suites, 37 villas and presidential suites. It succeeded. The shape of the building means that technical translators (Link to Constructive Translations) often use the simple English term “The Horseshoe Hotel” in research papers.

This stadium was the focal building for the Beijing 2008 Olympics and Paralympics. With its dark, winding beams it understandably earned the nickname, ‘Bird’s Nest’. Styling the steel in this way was intended to hide the mechanics of the retractable roof, however, the roof was taken out of the design and so the nest remained.

7. The Bank of China Tower

The Bank of China Tower is one of the most recognizable buildings in Admiralty, Hong Kong. The tetris-esque skyscraper is the fourth tallest in Hong Kong at 1,033.5 ft or 1205.4 ft including its masts. The structure also appears in the TV series Star Trek Voyager as the exterior of Starfleet Communications Research Centre.

Located in Suzhou, this private university building captures the forward thinking in unconventional design with traditional Chinese colours and materials. The structure takes the Taihu stone, a cavernous limestone, as its inspiration, allowing the hallways and steps to flow freely throughout.

This mile-long, white, structure is striking in its modernity. Primarily used for internal flights in China, this airport reflects the functionality and style that has been popular in the country over the last few years. The honeycomb-patterned skin acts as a filter from the summer sun, keeping the interior relatively cool.

The National Grand Theatre is a glass and titanium structure surrounded by a manmade lake, appearing to rest like a droplet on a smooth surface. At night the walls are semi-transparent and this allows passers-by a glimpse of the performances within. Its curves make it stand out in stark contrast to other local landmarks, very much in keeping with the futuristic style of its architect, Paul Andreu.

Designed by Rem Koolhaas and Ole Scheeren and engineered by Ove Arup, this skyscraper redefined expectation and required special approval as it broke previous building regulations. The building forms a continuous loop, made up of six balanced pieces, and serves as the headquarters for Chinese Central Television.

Nicknamed the ‘’Water Cube’’, this swimming pool complex was created for the Beijing Olympics in 2008. The square shape is considered to be symbolic of China while the bubble-like exterior reflects both its aquatic purpose and the research into the structural properties of soap bubbles which inspired the design.

The Harbin Twin Towers were completed in July of 2013 as part of the Harbin High Speed Railway’s (HSR) west train station. Not only is the building innovative and striking in its design and appearance, its upper floors house green terraces with controlled micro-climates for residents and those with offices within the towers.