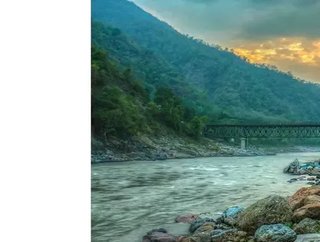 New Broad-Gauge Line between Rishikesh and Karanprayag will facilitate the movement of pilgrims to religious sites in the Himalayan state...

The construction arm of Larsen & Toubro has secured a large order for its Heavy Civil Infrastructure business from Rail Vikas Nigam Limited (RVNL) for Package Four of the New Broad-Gauge Line between the cities of Rishikesh and Karanprayag in the state of Uttarakhand, India.

In a statement, L&T says that the scope of the project includes the construction of Tunnels, Formation, Construction Shaft, and other Ancillary Works from Chainage 47+360 to 63+117kms between Rishikesh and Karanprayag.

The project involves the construction of 14.577-kms upline and 13.123 kms downline tunnel, with embankments of approximately 800 metres at both ends.

The company says that the entire project is expected to be completed within a stringent timeline of 60 months. It adds that it is already constructing Package Two of the prestige project, which involves 24 kilometres of tunnelling by the NATM, as well as minor bridges and formation works.

The 125-kms Broad Gauge New Rail link between Rishikesh and Karanprayag will reduce the current 12–15-hour road journey to just a few short hours. It will include the construction of 12 stations, 17 tunnels, including 15.10kms of the longest tunnel, as well as 16 major bridges – including one that is 65 metres high.

The new line is located in the Ganges valley, in Uttarakhand, which is visited every year by masses of Hindu pilgrims. It will facilitate the transfer and movement of pilgrims and tourists to the religious sites of Badrinath and Kedarnath, which is where the sources of the sacred river are located.