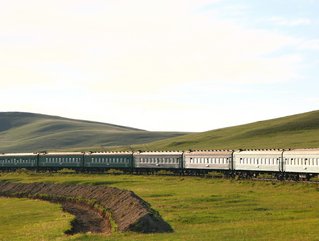 New 226.9-kilometre-long railway will connect the Tavantolgoi-Zuunbayan railway and the Khangi-Mandal border crossing on the Mongolia-China border

The Prime Minister of Mongolia, L Oyun-Erdene, has opened a new major rail link which will provide a significant boost to the country’s export competitiveness and wider economy, as part of the Mongolian government’s ‘New Recovery Policy’.

The Zuunbayan-Khangi railway, which runs for 226.9-kilometres across south-eastern Mongolia, will provide a vital connection between the Tavantolgoi-Zuunbayan railway and the Khangi-Mandal border crossing on the Mongolia-China border, a statement said.

Through a further connection to a new railway under construction on the Chinese border, the transportation distance for freight across this important economic corridor will be almost halved, significantly boosting trade in minerals such as iron ore, it continued.

Construction of the Zuunbayan-Khangi railway only began in March 2022 and its rapid completion is set to lead to a rapid 30% increase in Mongolian export freight volume, the Prime Minister said.

"The new Zuunbayan-Khangi railway was built in just eight months, through a public-private-partnership investment model, and is Mongolia's new gateway for transporting mining export products competitively to the global marketplace.

"Today's opening marks a major milestone in the Government of Mongolia's 'New Recovery Policy', which is focused on strengthening the country's economy following the pandemic and making Mongolia into a leading Asian country by 2050."

Annual freight volumes are set to stabilise at around twice their current level of 10.4 million tonnes from 2025, significantly boosting state budget revenues and local employment, the statement continued, adding that more than 180 companies and over 3,500 workers took part in the construction of the railway.

Mongolia has no access to the sea, and as such relies on 42 dry-road border points for its trade. However, till March this year, only three of them were connected by railroads. The completion of the Zuunbayan-Khangi railway delivers a second new railway crossing in the south of the Central Asian country.

The ambition of the New Recovery Policy aims to ensure that all border points are connected by roads, railways, and highways in consecutive steps, the statement concluded.