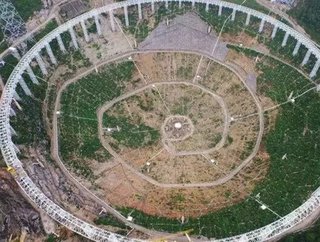 China has constructed the largest radio telescope in the world as part ofBejingsmulti-billion-dollar Space Program. Measuring 500 metres, with 4,450 pa...

China has constructed the largest radio telescope in the world as part of Bejing’s multi-billion-dollar Space Program.

Measuring 500 metres, with 4,450 panels roughly spanning an area of 30 football pitches, officials hope to detect signals and signs of life beyond earth. The Five-Hundred-Meter Aperture Spherical Telescope (FAST) is situated within Pintang County, within the province of Guizhou and built at the total cost of £180 million.

Peng Bo, Director of the NAO Radio Astronomy Technology Laboratory said: “FAST's potential to discover an alien civilisation will be five to 10 times that of current equipment, as it can see farther and darker planets.” Scientists will primarily utilise the telescope for research for the first two years to ensure the telescope is fully functional, ensuring minor issues can be resolved quickly, but will then ensure it is accessible for scientists and astronomers. It is hoped this the increased size telescope will intensify its sensitivity, enabling the detection of gravitational waves and pulsars within space, in addition to detecting early signs of hydrogen which would enable scientists to research, discover and understand the origins of the universe.

Nan Rendong, Chief Scientist with the FAST Project, told China.org: "Its scientific impact on astronomy will be extraordinary, and it will certainly revolutionize other areas of the natural sciences.” However, the US Defence Department has expressed unease with the telescope’s construction, stating that it could be used to "prevent adversaries from using space-based assets in a crisis."

Over 9,000 residents had to be relocated and compensated a result of the telescope’s construction, but most of the former residents have viewed the move positively. China is increasingly investing in its space programme, where its long term goals are to construct an orbiting station by 2020 and ultimately plan a new mission to the moon.