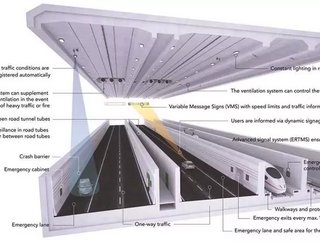 Work on the new 18km-long immersed Fehmarnbelt tunnel, which is set to connect Denmark and Germany, has begun. The tunnel is set to become the world...

Work on the new 18km-long immersed Fehmarnbelt tunnel, which is set to connect Denmark and Germany, has begun.

The tunnel is set to become the world’s longest immersed tunnel for vehicles and trains and is five times longer than the link under Øresund. It is set to provide many thousands of new jobs in Denmark and North Germany and will enable a greener corridor thanks to fast train links.

Known as the ‘Fehmarnbelt Fixed Link’, the tunnel will consist of a two-lane motorway and rail connection, enabling quicker travel between Scandinavia and continental Europe. The tunnel has shaved an hour and a half off the train travelling time between Hamburg & Copenhagen, meaning the journey will take place in just three hours.

The tunnel is built with health and safety as a top priority, with features such as an intelligent ventilation system in the event of heavy traffic or a fire in addition to emergency exits every 110 metres enabling fast evacuation in the event of an accident. A crash barrier and emergency lane is also part of the design.

Rather than a bored tunnel, an immersed tunnel is constructed using hollow concrete elements and is cast on land and assembled section by section.

The tunnel will host a total of 89 elements made of reinforced concrete and will be manufactured at a Rødbyhavn-based facility.

A trench will be dug under the seabed for the tunnel in order to build the link. It is set to be up to 60 metres wide, with a depth of 16 metres and length of 18km. The excavation material will be used to create new natural areas on both Lolland and Fehmarn.

Upon completion on the trench, work on placing the tunnel elements is able to go ahead. Each element weighs 73,000 tonnes but is able to float in the water as it is sealed with bulkheads and hollow. The elements will be towed out with large tugboats, where they will then be lowered onto the seabed with great precision before the assembly.

Once the tube is in place, the remainder of the tunnel can be constructed. The technical installation includes the implementation of tracks for electric trains, communications systems, lighting ventilation, transformers and pumps. The tunnel has been designed with 10 special elements with a basement for the maintenance machinery required.

These special elements will be located at every two-kilometre point within the tunnel and will include operation and maintenance equipment which is set to enable the tunnel to be maintained efficiently, thus reducing costs in the long run.

The tunnel is set to render a range of benefits for the surrounding area including more tourism, a larger export market and an increased number of opportunities for work and education.

Learn more about construction topics by reading the latest editions of Construction Global.