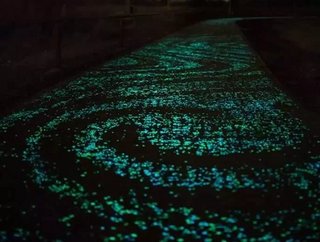 An innovative glow-in-the-dark cycle path has opened in the Netherlands. The path is made with thousands of stone, which capture the suns energy during...

An innovative glow-in-the-dark cycle path has opened in the Netherlands. The path is made with thousands of stone, which capture the sun’s energy during the day and glow at night.

The path was designed by the artist Daan Roosegarde in conjunction engineering firm Heijmans – the same company behind the country’s glowing highway project earlier in the year. The new cycle path cost in the region of 700,000 euros to build and will cover a distance of 600 metres.

“I wanted to create a place that people will experience in a special way, the technical combined with experience, that’s what techno-poetry means to me,” said Roosegarde.

In an interview published on Heijmans’ website, Roosegarde said the biggest challenge was, “To allow the organic nature of the pattern to survive, while everything was manufactured by machinery.

“The construction business often thinks in terms of kilometres,” he added, “but the design world thinks in millimeters.”

The path forms part of a route that connects Van Gogh heritage locations in Brabant, the icon’s homeland. The 600-metre-long path runs past the place where Van Gogh lived from 1883 to 1885. The province of Noord-Brabant absorbed 50 percent of the build cost.