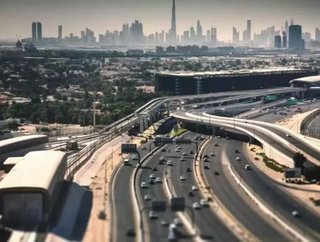 One of the largest and most prestigious transportation infrastructure projects in the Gulf region, the causeway will connect Kuwait City with an area across Kuwait Bay known as the Subiyah New Town or the City of Silk. The new settlement, which is expected to be completed in 2035, is planned as a major stop on China’s proposed “One Belt One Road” initiative, which is intended to revive the ancient Silk Road trade route.

By shortening the distance between Kuwait City and Subiyah from 104 kilometers (65 miles) to just 36 kilometers (22 miles), the new throughway will trim travel times from 90 minutes to less than 30 minutes.

In November 2012, the Kuwait Ministry of Public Works signed a contract with a consortium of Hyundai and CGC to design and build the causeway. A combination of low-level bridges and embankments, the project also includes 26 separate buildings and two artificial islands of 30 hectares each designed to enhance the scenic value of the drive. Other members of the consortium include Systra, AECOM; Dar Al-Handasah (Shair and Partners); T.Y.LIN International and SSH International.

Work began in November 2013. According to Eng. Mai Al Messad, the project engineer, the number of daily transmittals of inspection requests, checklists, approvals, and progress reports had already risen into the hundreds.

“We needed to manage the transmittals and to securely share documents with different organizations across multiple geographies,” Eng. Al Messad said. “It was critical for us to locate and retrieve project information quickly, and we needed to improve project control by automating manual processes.”

Eng. Al Messad said that the team settled on Aconex because the collaboration platform is project-wide, neutral and easy to use. With Aconex, no single organization owns the project information. Instead, each organization retains control and ownership of its proprietary data, and determines which documents and communications are shared with other members of the team.

Aconex also enables the project team to leverage workflow automation and create standard processes for everything from project communications to handover. This has provided the team with greater visibility and control.

For example, instead of sending requests over commercial email programs, participants manage correspondence as part of standard workflows on the Aconex platform. Rather than create, upload and register Requests for Inspection (RFIs) in one location and then download, edit, upload, supersede, and transmit them back again in another, the project team manages RFIs using workflows. This not only reduces the amount of record-keeping associated with RFIs, but also provides full visibility and control of all RFI reviews and approvals. In this way, Aconex makes it easy to track which RFIs are unanswered or overdue and which have been transmitted and received responses.

Aconex Smart Manuals frees the team from labour-intensive tasks related to gathering handover materials. These materials play a critical role in efficient operation and maintenance (O&M), and incomplete or inaccurate documentation can delay commissioning and significantly increase the asset’s lifetime cost. Aconex Smart Manuals enables the team to assemble all of the project’s drawings, blueprints, photos, change orders, reports, manuals, warranties, permit approvals, and operating procedures during design and construction, automating what had been an inefficient, last-minute process.

Eng. Al Messad said. “Complete, up-to-date manuals will ensure the efficient transition from construction to operation and maintenance of the causeway.”

“The Sheikh Jaber Al-Ahmad Al-Sabah Causeway is one of the world’s longest and most complex bridge projects,” said Henry Jones, Senior Vice President of Europe, Middle East and Africa (EMEA) and Global Accounts at Aconex.

“We are pleased with the opportunity to support the development through all phases of its lifecycle. The causeway is one of many examples of how Aconex is contributing to the successful delivery of transportation infrastructure projects throughout the Middle East.”