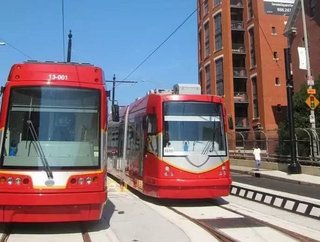 After more than ten years and multiple delays, the first segment of Washington D.C.&#39;s streetcar line opens. Constructed by a joint venture of M.C...

Constructed by a joint venture of M.C. Dean, Inc., and Facchina Construction Co., Inc., with Systra and Johnson, Mirmiran & Thompson (JMT) as lead designers, the 2.2-mile east-west segment between the Anacostia River and Union Station is the start of what the District of Columbia Dept. of Transportation (DDOT) envisions as a 37-mile network.

As the population in D.C. continues to increase and more people are beginning to use public transport to move around the city.

While most of the startup segment’s infrastructure has been in place for more than a year, an American Public Transportation Association peer review released last June identified various critical issues—including cracked rails, variances in platform angles, conflicts with moving and parked vehicles, and problematic rolling stock mechanical systems—that required attention before the streetcar line could open.

Those delays were compounded by a process of testing and operational approvals by federal and District regulators, with the final sign-offs completed in early February.

The line’s five streetcars are now running six days a week with 15-minute headways, and at no charge while a fare collection system is developed. Initial projections of 1,500 passengers a day are dwarfed by the corridor’s bus service, which handles 12,000 passengers daily.