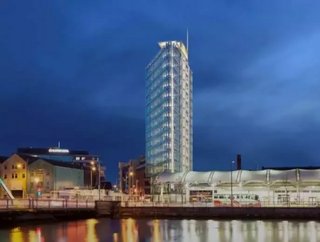 Tower Holdings Group has unveiled plans to build Ireland’s tallest building as part of the €200mn redevelopment of the Custom House Quay site in Cor...

Tower, a New York-based development company with Irish owners, has stated the hotel tower will contain 240 rooms and 25 services apartments. At 34 storeys, the tower would be the tallest building in Ireland, surpassing the 22-storey Capital Dock in Dublin.

The Custom House Quay development will be the centrepiece of Cork’s new business district. Conor Lee, Tower Holdings Ireland’s director of operations commented: “As the tallest building in Ireland, the hotel itself will be a focal point for the city rising.

Equally, the design is aimed at preserving the existing infrastructure for future generations through the addition of new tourism and commercial offerings … For the first time ever, this entire area will be fully opened up to the people of Cork.”

The Prism Building is a new, iconic, grade A commercial office development which will be located in the heart of Cork City. The tower will act as a gateway between Cork City Centre and the New Business District in the Docklands.

The building is planned to offer flexibility in order to cater to the bespoke demands of foreign direct investment and local blue chip indigenous customers who are looking for high quality office space which is above and beyond what is commonly available in the heart of the city. It has been designed by American architects Gensler, in association with local firm Henry J Lyons.